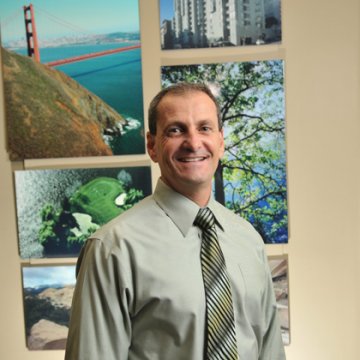 “We make decisions based on the situation. It’s all about serving and team playing,” says Eliahu. Uri Eliahu has devoted his life to service.

The CEO of ENGEO Inc., which provides geotechnical, environmental, hydrologic and geologic engineering, and construction testing and inspection services, also bases his company on a model of service.

“I was born to serve. … It’s natural to me,” said the man who created an organizational chart with himself at the bottom. “If you ask any ENGEO person, ‘Who do you work for?”, they will say they work for each other, their clients, regulators and the community, Eliahu said.

“(His employees) all have a smile,” Clark said. “His style of leadership is helping other people succeed. They do their best because of him. He sets a good standard, setting an example that helps them grow.”

The two men met more than 20 years ago, when Clark, hoping to develop a piece of land in Alamo, hired the man he called “the foremost geotechnical engineer” he could find: Shalom Eliahu. Instead, he got Shalom’s son Uri. Today, “Uri heads the highest-profile geotechnical engineering firm that appears before the Planning Commission,” Clark said. “I admire him greatly, in part because he’s got an unbending set of standards and holds himself to a high level of performance.”

As a young man, Eliahu chose civil engineering over medicine because of the industry’s lasting and direct impact on communities. And the company has grown and prospered under his leadership. He joined ENGEO in 1986 and became CEO in 1992. The employee-owned company, which had 11 engineers when Clark met him, now has a staff of around 130, with seven offices in California. Eliahu also stresses collaboration and inclusion. Once a year, everyone in the company is invited to a team business planning event.

“We essentially brainstorm ways we can improve: internal, business development, everything,” Eliahu said. “We really critically assess how we’re doing.”

The session is a precursor to ENGEO’s strategic planning summit that puts together the business plan for the year. Eliahu, who would rather talk about his employees than himself, said happily, “It’s very collaborative.”

Another management project is the amusingly named “BS Noonies.” Once a month, employees are invited to a business strategy session at lunch. “We can talk about new business or events … any question is fair game except private personnel things,” he said.

For example, there was concern when the company got a new — and higher — quote on its health care plan.

“We had to decide what to do … should ENGEO pay a bigger share? Should everyone pay through payroll deductions? Do we reduce benefits? Every option is on the table,” Eliahu said.

His management philosophy tends toward “less is more.” Although ENGEO has an employee handbook and complies with all regulatory requirements, Eliahu believes too many policies create an inflexible structure.

“We generally eschew ‘one size fits all,’” he said. Years at a large energy company that was very regimented — “they had a policy for everything” — led Eliahu to take another approach. “I came to believe that those extensive policies are a crutch for poor managers.

“We make decisions based on the situation,” he said. “It’s all about serving and team playing.”