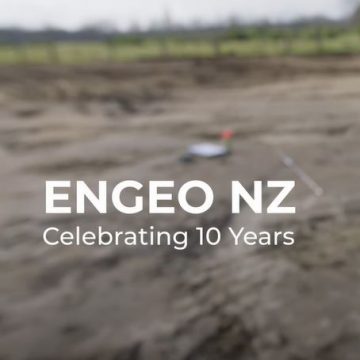 Today we are excited to share our new video, ENGEO NZ Celebrating 10 Years. This video celebrates the history of ENGEO in New Zealand over the past ten years, and the incredible company and team that our employees make up.

Initially started as Geoscience in 2010, co-founder Greg Martin wanted to create a workplace where the culture was different. Somewhere people actually wanted to come to work, and work together. Not long after Geoscience was established, the Christchurch earthquakes occurred and business took off. The team had to grow rapidly to keep up with the demand, and it became difficult to find enough good engineers to get the work done. After a chance meeting with a California based ENGEO consultant in 2012, it was “instant love” and they quickly offered their support to the New Zealand team.

Three engineers were sent to New Zealand and almost immediately realised these two companies could form a lifelong relationship. Within only a few months, a formal agreement had been reached and Geoscience became part of the ENGEO family. While the unique flat leadership structure at ENGEO fosters a family atmosphere, ENGEO truly is a family business. Current President Uri Eliahu’s father, Shalom Eliahu, was one of the original three founders of ENGEO in 1971. The reversal of the typical hierarchy at ENGEO encourages team members to prioritise the needs of others. This culture is why people love to work at ENGEO and leads to our success.

In just ten years, the New Zealand team has grown to 100 people, spread across five offices in New Zealand, and three in Australia. While ENGEO in NZ initially focused on providing post-earthquake expertise in Christchurch, it is now a highly diversified company operating at the cutting edge of our engineering fields.

Local communities are also benefitting from this success. In 2013 ENGEO’s charitable arm, The Dream Trust, was established as a way to give back. This can be in the form of fundraising, or volunteering and provides a real sense of purpose and fulfilment to the team.

From a small consultancy to a top end 100 strong team of experts, ENGEO has achieved a phenomenal amount in just ten short years in New Zealand.

Here’s to the next ten years!